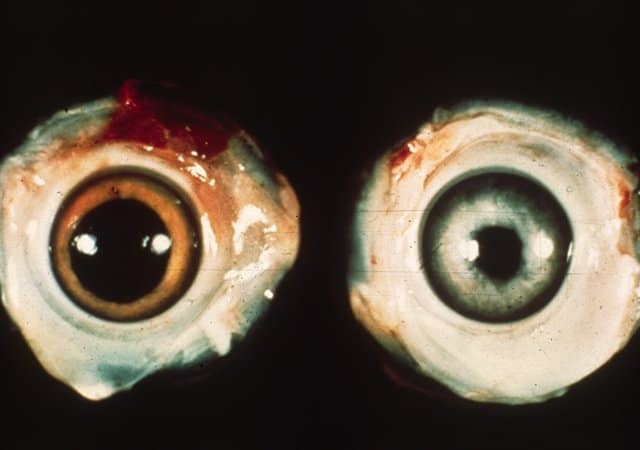 Actually they are one in the same. Range Paralysis is an older term that was used before it was understood exactly what caused this disease. Birds that were ranged on open range and became lame were said to have Range Paralysis. Today the modern term for this disease is Marek’s Disease. Marek’s, was first described in 1907 by Dr. Marek who was a Hungarian researcher. Thus the name Marek’s disease.

So, just what is Marek’s Disease ? It is a highly contagious Avian Herpes Virus that is highly Cell Associated. This means that the Virus must be inside a Cell of the bird in order to spread. Marek’s Disease must be differentiated between Avian Leukosis Complex, which is made up of three separate diseases. Those Diseases are, Mareks Disease, Lymphoid Leukosis and Reticuloendotheliosis Virus. The last two diseases are caused by Retroviruses and Reticuloendotheliosis Virus is rare in Poultry. What Marek’s Disease really boils down to is Chicken Cancer. It is a virus that causes skin lesions as well as lesions of the Visceral ( gut ) organs and nerve involvement. It is a Tumor forming Virus. If your bird is showing signs of crippled legs it is usually the Sciatic Nerve that is affected. If the Wing or Wings are droopy it is usually the Vegas Nerve that is affected. The Ocular form of Marek’s usually involves the Optic Nerve and the Eye Ball itself. When birds show none of the above symptoms but become unthrifty and all other Disease entities are ruled out it is most likely that they have the Visceral Form of Marek’s Disease. When birds have the Visceral Form of Marek’s it will present itself much like Coccidiosis. The birds become weak, sleepy, and reluctant to move and indeed may test positive for Coccidiosis. There seems to be a yet unexplained connection between birds with Marek’s and Coccidiosis. You will treat them for Coccidiosis but they never come out of it. The birds will eventually dry up and die.

How does Marek’s Disease spread? The mechanism by which Marek’s Disease spreads from bird to bird is quite complicated. So, I will tell you that it spreads through the infected  birds feather follicles and is in the dander that comes from the birds feathers. The spread to other tissues in the birds body can only take place through the blood stream. The virus must infect white blood cells and travel about inside them in order to infect other tissues. The Marek’s Disease virus is related to the Epstein-Barr virus that causes Hodgkin’s disease in humans. However the Marek’s Disease virus poses no threat as it is incapable of growing in mammalian cells.

So what organs are affected by the Marek’s Virus? Generally the virus will attack the nervous system as well as other body organs such as the eye. You may see a crippling of the birds or a discoloration of the iris in the eye. The virulence ( strength ) of the particular virus affecting your birds will usually determine the severity of the disease. The discoloration in the iris of the eye has led to the term Gray Eye. You may only see a reddening of the tissue around the feather follicle, this tissue may be raised around the base of the feather shaft and is generally called skin Leukosis but it is actually caused by Marek’s Disease. The spread of the virus to the peripheral nerves usually results in the enlargement of the nerves, which will eventually lead to paralysis of the affected limb or organ. The spread of the virus to the birds eye may result in blindness as well as de-pigmentation of the iris of the eye The edges of the Iris will also become irregular in shape.

Can older birds be vaccinated for Marek’s Disease? The answer to this question is, yes. The age of the bird really does not matter as long as the bird has not been exposed to the Marek’s Virus prior to vaccination. If a bird that has not been vaccinated for Marek’s Disease comes down with the obvious symptoms of Marek’s it may be of value to vaccinate anyway. It should be noted that the Mareks Vaccine currently in use by most Fanciers is derived from a Turkey Herpes Virus and does not give the bird a dose of the actual Marek’s Disease Virus. Vaccinated birds that are then exposed to the field strain of the Marek’s Virus will not show the symptoms of the disease but will shed the Virus. It (the Vaccine Virus) will not spread from bird to bird and cause Marek’s symptoms. There is some research to show that some birds may recover after vaccination. This would possibly work on birds whether or not they were vaccinated before. Some research has suggested that re-vaccination 4 to 6 weeks after the initial vaccination was of value in preventing new cases of Marek’s disease in high, risk areas. It is important to keep in mind that birds that have been infected (with Marek’s Virus and not vaccine) are shedding this virus at a very heavy rate from their follicles and it would be of value to keep feathers about your coop cleaned up.

Regular spraying with Oxine will go a long way in keeping this disease as well as other diseases under control. Research shows that Oxine is at least two hundred times more powerful than bleach. Concerning the use of bleach as a disinfectant: go ahead and use it if you so desire but be aware that to my knowledge there are no studies to show the effectiveness of bleach against any disease organism. Oxine has reams of test data against a wide range of Pathogens and is, designed to be used specifically for disinfection purposes. Oxine is labeled for use in the drinking water of chickens and is the only product that can be fogged over the top of chickens while they are still inside the Chicken Coop. Consider this: during the anthrax scare of a few years ago, The Hart Senate Office Building in Washington,D.C. was heavily contaminated with Anthrax. The disinfectant of choice (although it was used in its Gaseous Form) was Oxine. I don’t recall them using bleach as an alternative. Remember that you get what you pay for. My Dad once told me that if you want good clean quality Oats that they come at a price, and that if you want the Oats after they come through the horse they come a bit cheaper. Nuf said.

I thought it would be of value to walk you through the Marek’s Disease infection from start to finish from the birds perspective. This way you might get a better understanding of just what is going on during an active outbreak of the disease. Infection usually takes place as the birds inhale the Marek’s Virus and it sets up shop in the respiratory system. Within five days the Marek’s Virus will invade White blood Cells in the Respiratory System and be carried to the Spleen, Bursa and the Thymus. The Virus likes to grow in White Blood Cells and starts growing in B-cells and starts to infect and kill off B-cells in the Spleen, Bursa and the Thymus. The Marek’s virus is now killing so many B-cells that the Immune System begins to react to the Virus Infection. Many T-cells are generated by the Immune response. These activated T-cells can be susceptible to a latent infection by the Marek’s Virus. These infected T-cells may eventually become active Marek’s Disease Tumor Cells. The Immune System mounts a measurable Antibody response but a temporary Immune Suppression also occurs as well. Keep in mind that all of this is taking place in a very short period of time. Usually within one weeks time. The Virus now spreads throughout the blood stream through the infected White Blood Cells. The Marek’s Virus will spread to various other organs at this time as well as the feather follicle epithelial (surface) cells where the Virus will divide and form cell free extremely infectious Virus Particles. The birds then shed the Virus from their bodies in the form of dander. This dander is highly infective and when susceptible birds breathe in the Virus particles contained in the dander, infection will take place as earlier described. Within two weeks post infection a permanent Immune Suppression takes place that affects both the B-cells and the T-cells. Approximately five weeks after infection takes place the Marek’s Virus has sufficiently infiltrated vital organs and nerves that paralysis soon occurs. Birds may become listless and show a paralysis of one wing or drag a leg behind them. Some birds may only show a weakness of the legs or both wings. Starting at about six weeks post infection birds will start to form Tumors due to the infected T-cells starting to multiply and are now transformed into Cancer Cells. They are also responsible for Atherosclerosis or Hardening of the Arteries. Tumors may affect any of the organs of the body and the degree of Tumor formation will depend upon the Virulence ( Strength ) of the infecting Virus.

So should you choose to purchase vaccinated birds? The answer is yes. Do your homework and choose a reputable breeder or farm that takes this into consideration.

Check Out Blog Post On The Why of Marek's Here

Peter Brown, aka The Chicken Doctor, has been doctoring chickens for over 58 years and holds an AAS in Poultry Science, and a self trained Poultry Biologist. He is the founder and owner of First State Veterinary Supply, askthechickendoctor.com, and the former Poultry Pharmacy, the only legitimate and licensed, Pharmacy strictly for Poultry! Peter is a partner with Sugar Feather Farm and offers consultations to fowl enthusiasts who have concerns or questions.

by Eduardo Martinez
0
We offer shipping to all US States and Farm Pickup! Spring 2023 Ordering Open!